What's up, we just returned home from a short string of shows in addition to some new demo recordings with our new man behind the kit, Minneapolis' own Chris Zugschwert. 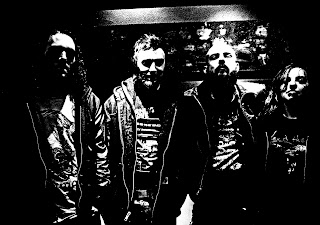 Many thanks to Cole Leonard for recording a bunch of new Enabler songs basically for some merch and beer. We can't wait to unleash this material on all of you, very stoked on what is to come. To Adam DeGross for doing promo photos of ours again, and for the awesome shows in Minneapolis. To Mike Alexander and the rest of our friends in Winnipeg. To Weekend Nachos for killing it in Minneapolis / Milwaukee with us. To Nathan Landolt for starting Error Records, an amazing show space and record store in Champaign IL, and to Recreant from FL for rockin it with us. To Early Graves for killin it in Kansas City. Major Thank You to Brandon Hoffman and Everything Went Black from for picking us up when our alternator blew and letting us play on all their gear and also to Joe Atkinson from Quare Verum for always giving us a home away from home in St. Louis, and last but not least thank you to Ray Houska and everyone involved in Forward Ohio 2013, it was an amazing fest for some awesome causes and we were happy to play a part.

"Shift of Redemption" live in Winnipeg:

More shows in the midwest next month!

Head over to this link and check out the new record!

http://www.invisibleoranges.com/2013/04/exclusive-ep-stream-enabler-shift-of-redemption/
Posted by Enabler (MKE) at 4:07 PM No comments:

North American shows for April and May 2013

Alright, so we'll finally be able to hit some of the spots that we weren't able to make last November, in addition to some more spots. We'll be adding 2 or 3 more shows to this list, so stay tuned! 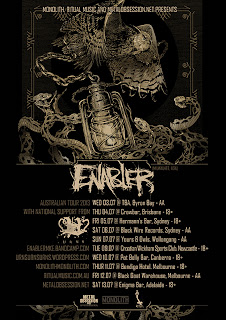 MONOLITH, RITUAL MUSIC & METALOBSESSION.NET presents...
From the mouth of ENABLER itself - “the world is fucked, and this is the soundtrack to its demise”. The Milwaukee four-piece has pushed out eight furious releases of their own unique meshing of metal, punk, hardcore and grind influences in the last few years, all while touring across the US and Europe with such legendary acts as Rotten Sound, Black Breath, Martyrdöd, and Wormrot. Following on from 2012’s critically acclaimed All Hail The Void album for Southern Lord Records, ENABLER has just released their scorching Shift of Redemption EP through Think Fast! Records, and will be heading down under for the first time this July to launch it.

Joining them on all ten shows will be blackened crust/sludge group URNS. Based in Melbourne, the band released a 7” through Midnight Funeral in 2012, and has recently reconfigured their lineup to its fullest, most devastating potential. The band has previously shared the stage with Tragedy, Burning Love and Rosetta.

Hey guys, we made it home safely. Quite the trek really. We played our last show in Bischofswerda Germany on Saturday 3/9, and then left at 5:30 AM to drop off half of Martyrdod at the airport in Prague. Luckily, our drivers were from Prague and took us around for the day. Prague is an amazing city, and honestly there isn't a lot of time on tour to go site seeing, so we were all pretty blown away. We left Prague for a 13 hour layover in Madrid at 7:30, and again we were lucky enough to have a friend in Madrid to put us up for the night and avoided sleeping in the airport. We took a cab back to the airport around 9AM, and then flew to Chicago, got through US Customs and Immigration ok even though we were smuggling a bunch of Rotten Sound merch in, and then ran to our connecting flight to Dayton Ohio. When we arrived in Dayton at 7:30, 5 of our 8 checked bags didn't show, so we had to go pick up our personal vehicles (which was an adventure in itself), and then come back at 12:30am, and there were our guitars and what not. The members of Enabler from Dayton go home, and Amanda and myself make the drive back to Milwaukee. On the way to Milwaukee, we hit really poor weather conditions with 0 viability when a semi truck blazed past us almost hitting us and leaving me with the choice of A. hit the semi, B. roll the van, C. cause a multi car collision, or D. go for the ditch. I went for the ditch, no injuries, no damage to the van, just a scared cat that we were bringing home that pissed all over her cage and the van. We finally made it home at 11:30pm on Tuesday night.

Thank you to Rotten Sound for bringing us out on this tour, you guys are an influence on this band and it's an honor to consider you our peers. Thank you to our tour buddies in Martyrdod, we've toured twice now together and it just wouldn't feel right to never do it again! Thank you to Marco and Mekk @ Avocado Booking for making this tour a possibility, and thank you to Fluffwheels and our drivers Petr and Nick for keeping us safe and making sure that we made it to where we needed to go.

Here is some footage of us in Europe on tour with Rotten Sound and Martyrdod!

New track and pre-orders for "Shift of Redemption" up now!

Today Milwaukee’s annihilating metal/hardcore squad ENABLER releases the first single from their pending Shift Of Redemption EP, due out on April 9th via Think Fast! Records. The second of four tracks on Shift Of Redemption, “Live Low” portrays the explosiveness this act conveys in every respect, their body-ravaging hatred and a dispirited outlook on life delivered through swift and brutal hooks that infectious as Ebola.

Stated ENABLER’s founding guitarist/vocalist Jeff Lohrber on the creation of the song: "I'm sure I could find some way to doctor this up and make this song seem like more than it is, but I see no reason to fool anyone. I was pretty pissed off and I intended on writing ‘the ultimate fuck you song.’ This song is probably my favorite Enabler song to play live. I can apply the lyrics in this song to many people in my life and I'm sure you can too. Fuck you forever."

Clench your fists and pummel your enemies to “Live Low” now via MetalSucks.

Next week, ENABLER’s first European tour with Rotten Sound and Martyrdöd begins, with sixteen cities across the continent on the itinerary, beginning with a sendoff show in Dayton, Ohio on February 18th.

Following their Southern Lord released All Hail The Void LP, ENABLER’s upcoming Shift of Redemption EP features four brand new tracks from the Brew City killers, and showcases the band expanding their infectious sonic violence into new territory. The tracks were recorded by Shane Hotchstetler at Howl Street Recordings, mixed by Chris Common (Pelican, These Arms Are Snakes), and mastered by Brad Boatright at Audiosiege (From Ashes Rise, Sleep, High on Fire), with artwork provided by Raf W. Think Fast! Will release the EP via digital download and 7”; the first pressing limited to 1,000 copies, with 350 copies pressed on gold wax and 650 on clear. Preorders/merch bundles are now available; vinyl preorders contain digital download coupons. Check it out